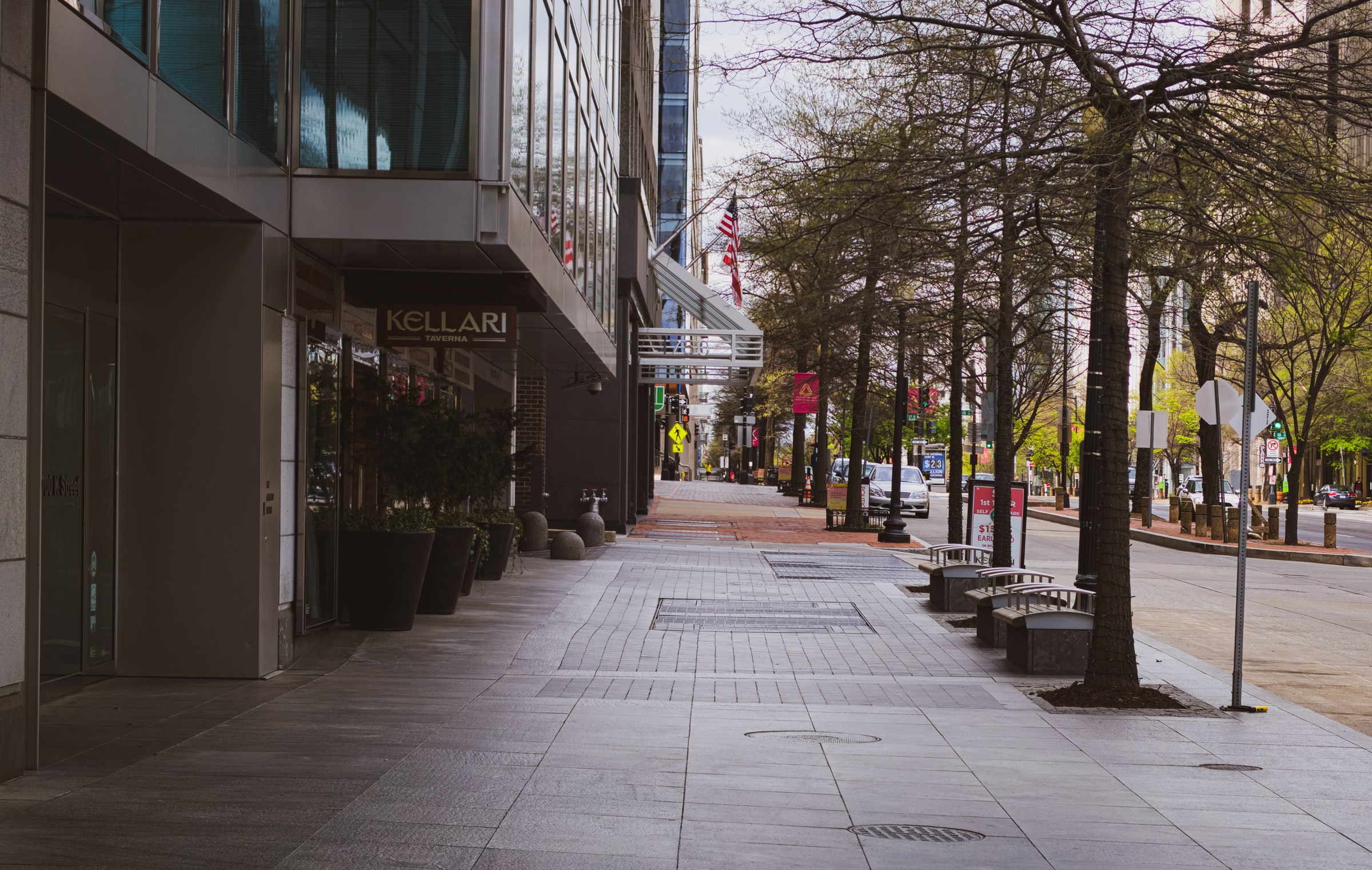 The District of Columbia weathered the pandemic with stable tax collections, down only less than 1 percent in FY 2020 while recovering above pre-pandemic levels in FY 2021. Yet, even as lawmakers in eleven states have cut income taxes this year, the D.C. Council has responded to surpluses and growth by voting to include substantial income tax increases in the budget.

Soon, Washington, D.C. will have some of the nation’s highest income tax rates—rates which people can avoid if they live in Maryland or Virginia, even if they commute into the city for work. Those who remain—particularly small business owners in the District—will feel the brunt of the tax increase, both directly through higher tax payments, and indirectly through the consequences of outmigration and the tax hike’s effect on economic growth.

In addition to steady own-source revenues, the District was buoyed by federal aid equal 37 percent of what Washington, D.C. typically collects in taxes each year. D.C. ended FY 2020 with a surplus of more than $550 million, and revenue forecasts anticipate tax revenue growth of about 3.5 percent per year for the next four years.

Higher income taxes have been on the agenda in D.C. for several years, though rationales have shifted. When Councilmember Charles Allen (D-Ward 6) proposed a tax increase last year, it was intended to fund violence interruption programs, rental assistance, and domestic violence shelters. Prior proposals were specifically for childcare. And the most recent proposal, which was incorporated into the budget by an 8-5 vote, would fund higher wages for childcare workers, additional housing vouchers, and monthly checks to low-income families, in addition to the District’s existing Earned Income Tax Credit (EITC).

Regardless of the spending priority, critics cannot help but notice that as the priorities change the funding mechanism—higher taxes—does not. The additional $175 million a year the tax hike is intended to raise by 2025 pales in comparison to the $2.8 billion in federal aid the District has received since last spring, about $2.5 billion of which is still available.

Moreover, even without a tax increase, D.C. tax revenue is projected to rise by $1.14 billion by 2025—six and a half times the amount the tax increase is expected to generate.

Under the budget provision, the top marginal rate in the District of Columbia would be 10.75 percent, matching New Jersey’s recent tax hike and falling just under New York’s 10.9 percent (the result of the only other income tax increase this year), Hawaii’s 11 percent, and the 13.3 percent top rate in California. The D.C. policy, like New York’s, appears to view higher tax rates as an end in themselves, not just a means to an end; in New York, policymakers vaguely defended rate increases by reference to badly outdated pandemic-induced revenue fears, despite stable revenue in 2020 and substantial revenue growth thus far in 2021.

The tax vote represents the continued unraveling of the tax reform package adopted in 2014 and accelerated in 2017, which saw individual and corporate income tax rate cuts, sales tax base broadening, and the recoupling of the estate tax threshold to federal law, among other changes. Last year, D.C. Council again decoupled from federal estate tax thresholds, and this year, the Council is poised to raise taxes to new heights, reversing the 2014 and 2017 reforms—and then some.

Imposing some of the nation’s highest income taxes carries risk in any jurisdiction, but the pitfalls are even more pronounced in the District of Columbia. D.C is an area of 68 square miles in which commuters from Maryland and Virginia pay income tax to their home state, even if they work in the District. A decade ago, the Washington, D.C. population swelled 79 percent every weekday after accounting for commuters, and while some of that trend seems to have reversed in more recent years, large tax increases could reinvigorate a shift to the suburbs, particularly given a rise in remote and flexible work opportunities.

The District of Columbia has a reciprocity agreement with Maryland and Virginia, by which all three jurisdictions agree that only the domiciliary state can tax an individual’s income, regardless of where it is earned in the region. (Notably, D.C. cannot simply opt out of this arrangement, which is dictated by Congress.) The reciprocity agreement supersedes the general rule that the state (or other jurisdiction) where income is earned may tax it, typically offset by a credit against liability in one’s home state.

What does this means for D.C.? It means that a high earner who moves to Alexandria, Virginia won’t have to pay a dime in D.C. income taxes, even if she commutes to an office in the District every weekday.

And, as the pandemic recedes, it’s quite possible that she won’t commute in every day. If we settle on a “new normal,” where many D.C. high earners are only in the office a few days a week and commute times are reduced, the number of workers willing to consider joining the hundreds of thousands who already commute from Prince George’s and Montgomery County, Maryland, or from Fairfax, Arlington, or Prince William County or the City of Alexandria in Virginia, is likely to increase. For many high earners, a shorter commute is among the most compelling reason to accept higher taxes and a higher cost of living in D.C. But increased telework flexibility may change that analysis dramatically, just as D.C. moves to adopt some of the nation’s highest income tax rates; the District is sending a signal that its leadership is no longer committed to keeping the 2014 tax deal in place. It’s a potent combination.

The tax reform package adopted in 2014, and implemented over several subsequent years, represented a dramatic change in the District’s approach to taxation. Although D.C. remains a high-tax jurisdiction, it is far more taxpayer-friendly than it had previously been. An important part of the continued success of the package has been the consensus that it is to be left alone—that the D.C. Tax Revision Commission deal, which was hammered out by policymakers and policy experts representing a wide range of opinions, should be respected, without going back and making piecemeal adjustments that undercut the compromises made by all parties.

Reverting an income tax rate cut would, therefore, be especially significant—it would represent the collapse of that consensus. That’s likely one of the reasons why Mayor Muriel Bowser (D) opposed the last income tax hike proposal, in June 2020. Now, with revenues growing, the argument for higher taxes is even less compelling. Higher income taxes affect both investment and labor, slowing economic growth. But in a jurisdiction like Washington, D.C., the ease of moving—and the clear tax savings from doing so, even if still commuting in—will make the consequences even greater. Those who stay will be on the losing end, too, even if they’re not subject to higher tax rates, as high earners spend less time (and, consequently, less money) in the District.

Meanwhile, while $250,000 is undeniably a lot of money—it is the 85th percentile for households in D.C., and the 95th percentile for individuals—it’s crucial to remember that most small businesses pay individual, not corporate, income taxes. Many of these small businesses will be hit by the higher proposed taxes. About 92 percent of all D.C. businesses are pass-through businesses (S corporations, partnerships, LLCs, and sole proprietorships) which pay through the individual income tax, and 89 percent of all pass-through business income in D.C. is reported on returns with an adjusted gross income of $200,000 or more, a percentage well above the national average of 75 percent. (Data are not available at the $250,000 threshold.) These small business owners will see higher marginal rates of 9.25 to 10.75 percent.

The District of Columbia has experienced something of a renaissance in recent years, fueled by lower taxes, new development, and lower crime rates. In the D.C. Council’s vote to incorporate higher taxes into the budget, local lawmakers are kicking one of the legs of the stool and hoping it doesn’t topple. It’s a risky gambit, and an unnecessary one given D.C.’s revenue outlook. The Council still has to vote on the full budget, and Mayor Bowser must approve it; there is still the possibility that the tax hikes will be reconsidered. Should the District of Columbia adopt a 10.75 percent top rate, however, proponents in the city won’t be the only ones celebrating a win. They will be joined by the real winners: taxpayers in Maryland and Virginia.